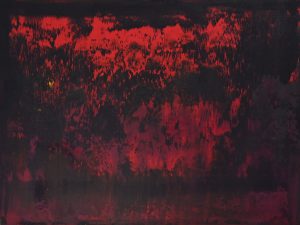 The Stolen Time series began when we went into the lockdown. Several pieces were started and even thought finished before this time but I went through a significant sea-change as events unfolded and it became clear what was happening.

The first piece in the series is an angry paining, angry due to all the deaths . It started as a very joyous piece with yellows, bright orange, teal and light blues. However, as the expected process of the pandemic became clearer to us the painting process changed. This effected what I was doing on a profound level, I was painting, so not consciously making an ‘angry’ piece, but gradually the work became darker, with the addition of dark reds and transparent magenta being the last elements that were added before being scraped away.

So, this became a fascination for me, I had been making bright, joyful, out-streaming works. I started to rework other canvases, some which had been in the studio for months, soon running out of surfaces.  So, I pulled things out of storage and re worked them.  I felt driven preparing many small canvases and boards, ordered huge stretchers, rolls of canvas and new paint, soon amassing over 60 paintings.

This has been a challenging time for me, but a time of passionate change and creativity, which is still ongoing. The gift of having four months alone in the studio painting, without the pressure of feeling I should be doing something else. Not preparing; teaching, marketing, social media, gallery and open call applications, approaches to gallerists and curators. Somehow, I found I was making work I had been attempting to create for a decade.

I experienced these paintings like visitors their presence was there with me rolling in like the rhythms of a great tide. Wave after wave washing through me sometimes recognised but often not grasped in the moment. I would perhaps only realise the worth of something in the next days or weeks later, once it had settled. These discoveries each day were reason enough to enter the studio with my heart in my mouth. I couldn’t wait to see “What’s new today? What can I make of today?”