It’s hard to describe the genesis of such a group of paintings as paintings have their own logic and rhythm. Three of these paintings I started when I was 28 years old (27 years ago) which is a very strange realisation for me. In 1993 I had an imaginative experience during meditation in which I found myself on a desert plane looking off into the distance at a range of mountains, when a naked man ran past me from the right. He was struggling and fighting as he went. But he was guided by a huge and gracious swan which sat calmly and serenely on the top of his head guiding him toward the mountains which he desperately struggled to avoid, seemingly wanting no part in reaching and denying this inevitability. 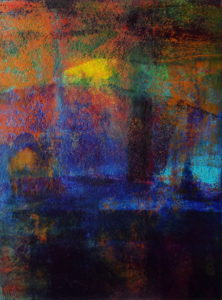 These mountains began to appear in my work. So I would suddenly see, when making a painting, a mountain appear. I have several pieces of art which float in the studio for many months or even years, before I know how to complete them or what they may become. They come back onto my easel time and time again. Last year my father died and after his funeral when I came back to the studio I realised that I couldn’t carry on in the same vein. I needed to make significant changes. So I went to my storage area and pulled out many canvases which for one reason or another had been abandoned or left incomplete, but which were still significant for me. I took them to the studio, cleaned them and reworked them, led by a strong intuition, and more ‘mountains’ appeared! 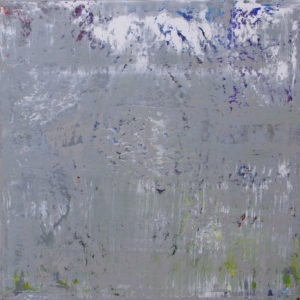 When I visited the Staats Gallerie in Stuttgart last July I saw an exhibition of works from the Brucke artists in which was a woodcut by Erich Heckel, ‘Man in the Plane’ 1912-1919. 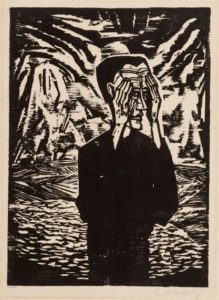 This small piece resonated so strongly with me – the man in despair with his hands to his head seeming lost, with the distant mountains behind him. As I have said it is very difficult to describe all that stands behind a painting, from the standpoint of the conscious mind, as paintings are their own thinking, in a way. But also they are how we make sense of life. Jeannette Winterson says that art objects are there to carry what we can’t bear and the artist Leigh Hyams described in her book ‘How Painting Holds me to the Earth’, how her artistic practice kept her sane. An artwork may carry something universal, and in its immediacy and uniquely personal apprehension keep us in contact with the world around us. Art can prevent us from becoming too self-absorbed, because we step actively into the future as we engage with and develop our understanding of it. Theodor Adorno defined the artwork as being a thing in itself which stands alone and will brook no other, as such, a created ‘presence’ in the material world. This series ‘The Holy Mountains’ describes a journey, a human journey, the journey to discover oneself as ‘A Little World’. 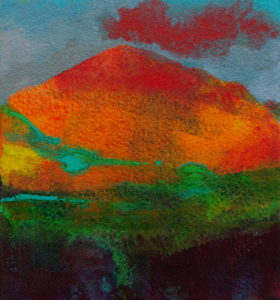 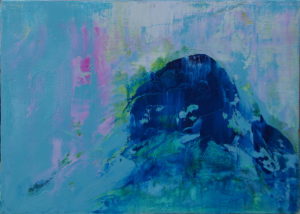 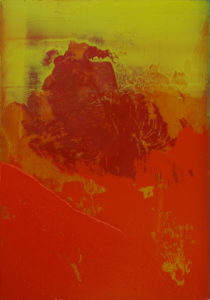