‘Painting during lockdown’ by Richard Heys

‘Nothing is possible without faith’ – Gerhard Richter 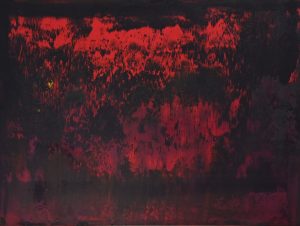 I currently live in Sussex on the fringes of the Ashdown Forest and work from a fabulous studio at Emerson College. I have been a contributing teacher at Emerson since 2005, teaching in the art department. The full-time Visual Arts and sculpture course has closed so I rent a large studio in which I used to teach.  I was keen to embrace the wonderful space in order to create large works. I live a mile across the valley from Emerson and often walk to and from the studio through the fields.

The aim of my practice is tuned keenly, I strive to bring presence into painting, to open up a soul space allowing the viewer to breath with the artwork. For me, a painting must have countenance – a spiritual presence – so that the artwork may live on in the mind of the viewer and evolve over time. Aiming for mystery in this world of the known, I create standing before the unknown.

What set me on this journey was discovering Ian McKeever’s Temple Painting at the Royal Academy in 2007. I couldn’t understand how the piece came off the wall to greet me. I have, since that moment, wrestled with the issue of how to create this presence. These days I have a deeper appreciation of how pure colour can project and recede from the picture plane and this is informed by the ‘frontality’ of the icon tradition, brought into the Abstract Sublime by Mark Rothko.

In 2013 I was excited to visit the Gerhard Richter Retrospective at the Tate Modern and was surprised to discover that his work made me feel unwell. Seeing image after image of grey or smeared and scraped colours left me without breath. At that very moment I decided to explore print making equipment and make some paintings that glowed with transparent breathing colour. 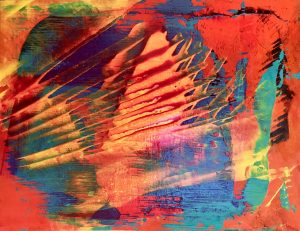 During my Fine Art degree, I spent 3 months in print making department. There I learnt so much about process and light and darkness through engaging with various print techniques and pushing these to see how far one could take these. I realise this exploration is still ongoing. In my practice I work with print-making tools, bespoke squeegees, silicon tools and brushes. I work to remould inner spaces, to invite attention to and engagement with surface and image, surface and depth, outer picture and inner soul-space. I aim to create, borrowing a phrase, “the painting as a doorway”. 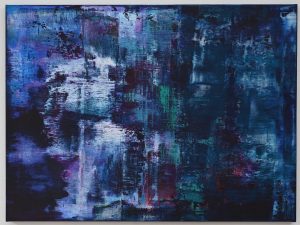 I gave my lockdown series the title “Stolen Time” for a variety of reasons – not least for the sense of time out of time which descended, along with the lockdown protocols, upon the village of Forest Row. With no cars on the roads and, amazingly, no planes in the skies – no vapour trails, no mechanical sounds at all (bearing in mind that we’re 25 minutes from Gatwick here). I’d hear only birdsong on my way to the studio – arresting, lively birdsong, seeming all the more present for the stillness and absence of other noise.

I’d find my way across the water meadows where the Medway meanders, crossing the river over an old cattle bridge of recycled railway sleepers, passing beneath the canopies of several oaks, sickly ash and alder trees, encountering birds; Egrets, a raven, a peregrine falcon and Honey Buzzards. The awakening trees began to obsess me – the greening and gradual clothing of their crowns accompanied my walks, I was minded of Joseph Beuys’ thoughts when asked about his 5000 oaks project, he surprisingly said ;

“…The trees today are much more intelligent than humans. When the wind passes through their crowns, the very substance that the suffering people have brought to the earth moves through the crowns of the trees as well.”

Passing between and beneath these trees in quiet reverie, I was astonished by what was unfolding around us, in the world and in nature. The beauty of new growth, the magenta bloom on a whole oak tree before its buds burst, so fleeting, is something to behold. Of course I’d seen all this before in my phenomenological studies and teaching, but now it all seemed like a first. The crops growing and flowering in the fields, the honeysuckle, Blackthorn and Hawthorn all permeated the air in a more exotic way, all nature culture seemed renewed as our human culture was halted, brought to pause by this unknown threat.

Once in the studio, I found excitement and surprise. Seeing the latest paintings, with my heart in my mouth. I was in an ecstasy of purpose and delight in colour, the next steps of painting would reveal themselves in the making. Using squeegee is such an unsentimental way to work as the veils of colour and draws of paint literally destroy and reveal the canvas anew time and time again. The process becomes a kind of revelation, applying and scraping away, not merely laying colour on colour. Day after day the process deepened, the mood coalesced as one particular colour mood and conversation would lead to another, calling up another and so on. I created in a heightened state of realisation – what will we do in the face of death? What will we do despite our fragile condition? 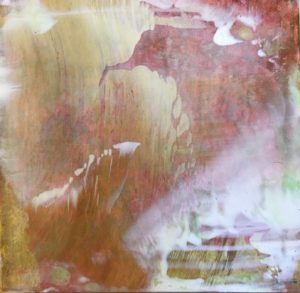 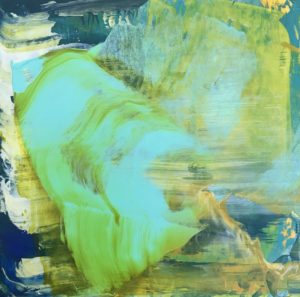 In many respects the studio process had not changed, I had the place entirely to myself; as my two morning classes and weekend courses were cancelled. My exhibitions were also affected, The Other Art Fair London and the Affordable Art Fair were postponed. The South East Open Studio event called off, disappointing me and many hundreds of artists and visitors. But this meant I could clear the studio, it was as if I’d pushed the walls back, pushed the clouds aside letting in a stronger light.

One paints by necessity alone, it is a private activity, one works toward one’s centre, developing a singular focus. But I soon found I did not feel alone, news of events in the world, horrible statistics of isolation and death and the uncertainty of our position, it seemed everything we had taken for granted was no longer there for us. What was there day after day were heightened feelings. I felt anguish and elation, fear matched against tremendous creativity and freedom. An unusual sense of accompaniment and confidence in finding answers to the questions of each new painting, the works developing seemingly independently of my feelings.

For the ancient Greeks Prometheus, the god of foresight, stole ‘fire’ from heaven, and gifted it to humanity. Was it this “fire” that I experienced in the creation of these paintings? It was not a mindless joy, not a technical action, rather a hair-raising certainty and belief in the spiritual, serendipitous nature of the work; as Louis Pasteur said – “chance favours the prepared mind”. The destructive nature of this drawing down and removal of colour is a creative act, each time, destroying to create. This for me is work in the 21st century.

In my practise change comes about through the destruction of old forms. As Per Kirkeby sagely said of the painter “We work standing amongst ruins”, defining his over painting and fitting so aptly his place in the northern European stream of art. The new does not arise in a vacuum, but rather within certain eddies and streams of energy and potential. The work becomes a metaphor for life, a mirror of life; like pages in the diary, as Peter Doig said; never to be repeated, or relived, unique and right in that very moment, timely and all the more conscious and prescient  for this.

The gift of having four months alone in the studio painting, without the pressure of feeling I should have been doing something else. Not preparing; teaching, marketing, social media, gallery and open call applications, approaches to galleries or curators. Somehow, I was making work I had been attempting to create for a decade. I experienced these paintings like visitors, their presence was there with me rolling in like the rhythms of a great tide. As image after image passed through, sometimes recognised, but often not grasped in the moment. I would only realise the worth of something the next day or week later, once it had settled. These discoveries each day were reason enough to enter the studio with my heart in my mouth, to see “What’s new today? What can I make of today?”

An otherworldly, spiritual atmosphere fed this work. I felt removed from life, only for life to be all the more present! As emotion after emotion washed through the studio and filled these canvases, with their nooks and crannies of colour with meaning; struggle and reconciliation, expression and silence, self-censure leading to greater, deeper feeling – not to be spoken of, never to be sounded. The silence seeming all the louder in-between these colours, inculcating wonderful moments in paint. 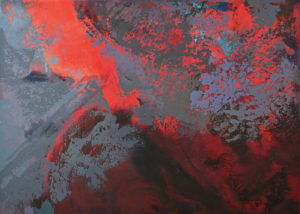